The rapid rise of gaming phones has coincided with the emergence of Nubia’s Red Magic line as a real force. After 2017’s Razer Phone proved there was a market for dedicated gaming handsets, the first Red Magic phone arrived in April 2018.

It’s gone on to maintain an aggressive six-month update cycle, but 2021 is proving to be Red Magic’s biggest year yet. March’s Red Magic 6 series saw a regular and Pro model for the first time, even if the latter is still exclusive to China. The brand’s first wearable arrived in the form of the Red Magic Watch, but it’s the other phone that launched alongside it that’s the focus here.

The Red Magic 6R is a new, affordable alternative to the 6 and 6 Pro that doesn’t sacrifice on high-end specs. But can it compete with the wealth of capable mid-range handsets currently available? Let’s find out.

With the Red Magic 6R, it’s clear Nubia is trying to appeal to more mainstream design tastes. It’s significantly scaled back the typical gamer aesthetic in favour of clean lines and a minimalist look and feel.

That’s reflected in the colour options, with the ‘Cosmos’ model I tested joined by a single ‘Mercury’ alternative. It’s the first Red Magic phone I could see normal people taking an interest in, rather than being put off. However, die-hard mobile gamers might miss the wacky designs we’ve come to associate with the Red Magic range.

Still, there are some subtle signs of the 6R’s gaming prowess on the back of the phone. It features a two-tone design and some unique patterning, both of which are likely to resonate with gamers.

Of course, one thing you can’t ignore here is the rear camera module. It features four lenses and large flash, but protrudes significantly from the back of the phone. That makes it rock annoyingly when you use it on a table, but that’s not a big issue for most people. More on the cameras later.

Flipping the Red Magic 6R over reveals a large touchscreen display, housed within an impressively slim bezels. This gives the phone an impressive 87.5% screen-to-body ratio, primarily due to a hole-punch selfie camera, something you won’t find on the regular Red Magic 6 and 6 Pro.

The lack of symmetry may irk gamers (because most games are played in landscape), but it makes much more sense during everyday use. That 16Mp  camera works well for face unlock, but it’s not as secure as Face ID or other 3D-scanning systems.

I’d recommend using the optical in-display fingerprint scanner – it’s the most impressive implementation of the technology I’ve tried so far. Unlike some other phones, it was both extremely fast and reliable – the only time it stopped unlocking was when my finger was wet.

There’s Gorilla Glass 3 front and back, while the frame is made from aluminium. Nubia has kept things very simple on the sides of the device, with just a power button, volume rocker and two shoulder triggers. That means there’s no dedicated slider for the ‘Game Space’ mode, although the mode is available.

Unfortunately, Nubia has downgraded the cooling system on the Red Magic 6R. The built-in fan you’ll find on the 6 and 6 Pro isn’t here, so the device can quickly get hot to the touch during intense gaming. It’s not a huge issue, but definitely noticeable compared to recent Red Magic phones.

The bottom of the phone is where you’ll find the single SIM tray (no microSD support, sadly), USB-C for charging and single downward-firing speaker. The latter provides impressively punchy audio for something so small, but lacks a bit in detail.

However, it’s also worth highlighting the Red Magic 6R’s weight. It clocks in at 186g – that’s fairly typical for a modern smartphone, but significantly lighter than the 220g Red Magic 6 and 6 Pro.

Let’s talk about the main event – the Red Magic 6R’s 6.67in AMOLED display. It’s slightly smaller than the 6.8in panel you’ll find on the Red Magic 6, although both share the same 1080×2400 resolution. That’s plenty detailed for most people, especially when you consider the high refresh rate.

The Red Magic 6R can hit 144Hz – that’s up there with some of the best smartphones, beaten only by the Red Magic 6’s class-leading 165Hz. From testing that phone, I can assure you that the extra 21Hz makes very little difference. Even if it did, few games on the Google Play Store are compatible with these high refresh rates.

In everyday use, the Red Magic 6R’s display ticks all the boxes for most people. It deliver great colours and impressive dynamic range. I also recorded a maximum brightness of 370 nits, and visibility was good in all but the harshest lighting conditions.

Despite its mid-range price point, the Red Magic 6R undoubtedly features top-of-the-line specs. It shares many of these with the more expensive Red Magic 6, including Qualcomm’s flagship Snapdragon 888 chipset. This is includes a capable Adreno 660 GPU and 8GB of RAM on the model I tested, although there are also options for 6GB or 12GB of the latter.

Combined with that 144Hz refresh rate and a 400Hz touch sampling rate, performance from the Red Magic 6R is stellar. It zips through web browsing, emails, messages, videos and multitasking with relative ease, but high-end gaming is where the phone really excels.

Many games don’t support those higher refresh rates, but they all provide an immersive experience that you’ll struggle to beat on a smartphone. That’s especially true while playing demanding titles such as Call of Duty: Mobile and Asphalt 9, which some similarly priced handsets can struggle with.

The former is where the shoulder triggers on the right side of the device come into their own. As the name suggests, they can be used to shoot opponents (or trigger other functions) rapidly, freeing up your thumbs for other things. Combined with the high refresh rate, this could potentially give you a crucial upper hand during fierce combat or racing games.

This superb performance is reflected in the below benchmarks:

It’s also worth noting that the inclusion of the Snapdragon 888 chip means the Red Magic 6R supports 5G. The technology becoming more widespread these days, but I only had a 4G SIM during testing so can’t comment on its effectiveness.

The Red Magic 6R runs the custom Red Magic OS over Android 11, with no word on a potential update to Android 12 once it comes out. Now in its fourth generation, Nubia’s skin is a big departure from so-called ‘stock’ Android, with fewer rounded corners and no app drawer.

There’s also plenty of bloatware. Nubia has its own versions of the calendar, clock, photo gallery, dialler and many more – none of which can be uninstalled. There are no duplications here, but I expect most people would prefer Google’s versions.

Other notable changes in Red Magic OS 4.0 include a new-look notifications shade and redesigned Settings menu, but you do still get the Google Discover cards to the left of the home screen.

There might not be a dedicated button for it, but Nubia’s Game Space mode is still here. It works in the same way as on other Red Magic phones, boosting performance and limiting distractions for a more immersive experience. Instead of flicking the slider on the side of the phone, you’re instead prompted to launch Game Space when starting up a relevant game.

One of the great things about Android is its range of customisation options, but they’re relatively limited here. The big disappointment is that you’re limited to the default launcher – there’s no way to change it without jailbreaking. And this is unnecessarily restrictive.

If Nubia is trying to appeal more to everyday consumers with the Red Magic 6R, cameras take on greater importance. The device has the same 64Mp wide and 8Mp ultrawide sensor as the regular 6, but bumps the macro up to 5Mp and adds a new 2Mp depth sensor.

Unfortunately, the results you get aren’t a noticeable improvement over what we’ve seen from Red Magic phones in the past. Stills aren’t bad by any means, but they do fall short of what we know smartphone cameras are capable of.

The 6R has a tendency to produce shots which either look washed out or have too much contrast – there’s very little middle ground. That does mean some photos are pleasing to the eye, but they’re not very true to life. It also makes the camera quite unreliable, as you can’t trust it to consistently produce the same quality.

You can tweak this via the camera’s ‘Pro’ mode, but the Red Magic 6R doesn’t have a great point-and-shoot camera.

That being said, there is still a lot to like here. The wide-angle lens offers some great flexibility, while the dedicated night mode produced impressive shots in low light. An upgraded 16Mp front-facing camera also delivers great detail in selfies, even if beauty mode is enabled by default. Check out a range of image samples below: 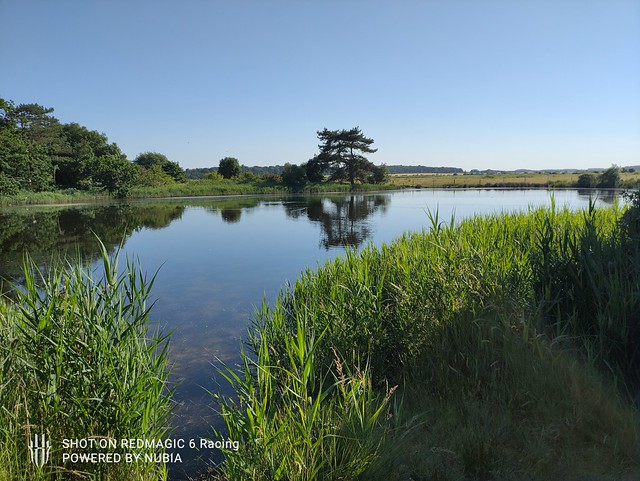 On the video side, the Red Magic 6R is capable of up to 8K footage at 30fps, but most people will be happy sticking with 1080p at 60fps. The inclusion of electronic image stabilization (EIS) at all resolutions except 8K means footage remains smooth while moving around.

Battery life is another area where Nubia has made compromises. The Red Magic 6R has a 4200mAh cell, down from 5050mAh on the 6 and 6 Pro. Despite a slightly smaller display, it’s a significant step down.

I recorded a solid 9 hours and 20 minutes in Geekbench 4’s screen-on test, but that’s with brightness set to 120 nits – much dimmer than most people will use. It’s also significantly less than the 13 hours and 57 minutes the Red Magic 6 managed.

That’s consistent with my experience, although I had to drop the refresh rate down to 90Hz to make sure. This provides a good balance between smooth visuals and battery life, but means you don’t take advantage of what the phone is capable of.

There’s some regional variation when it comes to charging speeds. The Chinese variant of the Red Magic 6R can handle 66W, but you’re limited to 30W on the global version, the one I tested. The adapter is at least included in the box, and it charged the phone up to 60% in just 30 minutes.

Even if you opt for the more expensive configuration, it still undercuts the Red Magic 6 on price. It’s also one of the most affordable dedicated gaming phones out there. A comparison to the £799 Asus ROG Phone 5 feels unfair, but the Red Magic 6R can still hold its own.

If you’re content with the compromises here, the 6R is excellent value for money.

Despite ditching the gamer aesthetic and built-in fan, the Red Magic 6R is arguably Nubia’s most ambitious gaming phone so far. That’s primarily due to its affordable mid-range price point, and the fact it doesn’t compromise on high-end specs.

You’re still getting the top-of-the-line, 5G-enabled Snapdragon 888 chipset, alongside powerful integrated graphics and generous helpings of RAM and storage. Performance is superb, as you might expect.

That’s significantly helped by a large 144Hz AMOLED display. It’s a slight step down from the Red Magic 6’s class-leading 165Hz, but it’s still best of the rest when it comes to smartphones, and very few games support the higher rate anyway.

But, the 6R is far from perfect. The cameras and software are still more frustrating than fun to use, while a reduced battery capacity means you’ll be reaching for the charger sooner when using the highest refresh rate.

Nonetheless, there’s still plenty to like here. If you’re looking for a top-tier gaming phone without the traditional design or price tag, the Red Magic 6R is a great option.

For more information on what goes into one of our reviews, check out our dedicated article on how we test smartphones.